The Associated Press is reporting that the now shuttered Revel Casino in Atlantic City has found a possible buyer.

From the AP: "The casino said in the bankruptcy court filing that Glenn Straub's Polo North Country Club, Inc., made the cash bid for the $2.4 billion resort. The casino also wants a judge to set an auction for Sept. 24 if any higher bids are received by Sept. 23. A bankruptcy court judge would have to approve any sale. 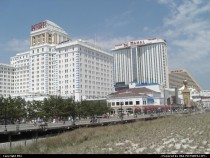 Chris Christie has Signed Off on Gambling Self-Exclusion Bill

New Jersey Governor Chris Christie has signed into law legislation that would permit gamblers to self-exclude themselves from casinos and online websites.

The law applies to anyone who signs up and makes a request.  Previously, individuals would have had to demonstrate that they had a gambling problem.

Not only can you enjoy a FREE $10 sign-up bonus just for registering, but simply by playing you can win tickets to see ANY concert hosted by Live Nation*!

New Jersey is the most populous state to legalize gambling on the Internet, joining Nevada and Delaware. In April, New Jersey’s online revenue fell by $500,000 to $11.4 million. In Nevada, which limits Internet bets to poker, revenue was $926,000 in March, the most recent month for which data is available. In Delaware, it was $207,000.
By Payton
on on June 12, 2014

April wasn’t a great month for New Jersey online gambling, and most can point the finger to a decline in online marketing due to strict gaming laws imposed by the state.