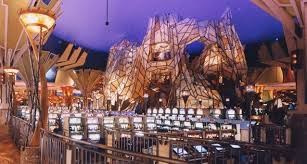 The Mohegan Sun Arena, entertainment arm of the Mohegan Sun Casino in Connecticut has positioned itself to be ranked as one of the top entertainment venue brands, and recently won their ninth award in seven years – “Casino of the Year” at the 2015 International Entertainment Buyers Association (IEBA) Honors and Awards Ceremony.

The 10,000-seat arena features top headliners in music, comedy, and sports – including Taylor Swift, Fleetwood Mac, The Eagles, Kenny Chesney, Jay Z, plus championship boxing, MMA, WWE, plus NCAA and professional basketball. Consistently ranked among the top venues in the world, its accolades include Country Music Awards 2008, 2010, and 2013 Casino of the Year, and Arena of the Year at the 2013 G2E Global Gaming Conference in Las Vegas. The Academy of Country Music Awards has ranked the Mohegan Sun Arena as one of the top 10 venues in 2014, and recognized it in two distinct categories.

The 2015 Casino of the Year Award was presented in Nashville’s Omni Hotel and Country Music Hall of Fame & Museum, and was voted on by the industry’s top entertainment executives, agencies, management groups and venue owners throughout the country.