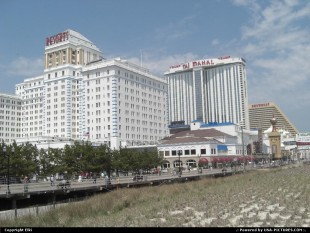 “This was an inevitable occurrence,” Christie said. “When you have the kind of competition that’s been coming up, Atlantic City at this size of a gaming footprint was not going to last.”

Asked repeatedly if the possibility of a casino in the northern New Jersey Meadowlands or elsewhere in the region was discussed, Christie said, “Everything is on the table.”

He said he did not make a recommendation on such a casino.

The governor portrayed the two-hour session with elected officials, union leaders and executives from the Caesars Entertainment casinos, the Borgata, Golden Nugget, Tropicana and Resorts, as the beginning of a working process.

He said he gave each participant instructions for information to be delivered to Jon Hansen, who crafted the report on which Christie based his plan for a five-year effort to aid Atlantic City before considering expanding casinos to other parts of the state. Christie said the parties will meet again in 45 days.

The meeting came shortly after Christie’s administration said it would allow casinos and horse tracks to offer sports betting — a move favored by the casinos but certain to be challenged in court by professional and collegiate sports leagues.

State Senate President Steve Sweeney said there was no discussion about a possible voter referendum in 2015 on whether to amend the constitution to expand gambling beyond Atlantic City.